Maximizing booth space, engaging attendees, and staying under budget are top priorities for many clients of The Rogers Company. Saint-Gobain Performance Plastics, a leader in materials technology, was no exception when it faced the challenge of exhibiting its line of ONESuit® hazmat suits at 2009’s FDIC.

ONESuit is a part of the protective systems division of Saint-Gobain Performance Plastics. Its line of lightweight, single-skin hazmat suits offers chemical, biological and flash fire protection for first responders, military units, and firefighters throughout the globe.

In order to reach this target market, ONESuit exhibits at FDIC, North America’s largest firefighter training conference and exhibition. Each year, thousands of attendees gather in Indianapolis to survey the latest technology in first response. With over 900 exhibitors, standing out to purchasers on the show floor is truly a challenge.

“This year, we wanted to take a different approach to displaying our suits. FDIC is such a large show and you’re dealing with a whole range of firefighter equipment from ladders to trucks, so we needed to ensure our hazmat suits would not get lost in the crowd,” says Peter Kirk, Product Manager for Saint-Gobain Performance Plastics.

After much deliberation, Saint-Gobain settled on a 360 degree creative approach. By using three circular platforms to display its colorful suits, attendees within reasonable distance would be able to view Saint-Gobain’s products from any angle. A central pillar would display the material component of each suit, inviting attendees to become engaged by reaching out and touching the material. This approach would also maximize booth space, and allow for excellent storage within the pillar.

The Rogers Company was given the difficult engineering task of executing this creative concept. “Our hazmat suits are brightly colored and the idea was to present these great looking products against a very stark, white curved background,” says Kirk. We also wanted the suits to appear to be floating in their own unique cylindrical towers.”

Ralph Engel, a 15-year veteran of The Rogers Company, was tasked with making this creative vision a tangible reality. He immediately requested one of the hazmat suits so he and his team could experiment with different display methods.

Keeping an eye on the budget, The Rogers Company was able to lower the final cost of production by engineering the central pillar to serve as both a graphic display and a basis for storage inside. Connecting the suits to grounded poles -- as opposed to hanging them from the ceiling -- proved to be another cost-effective idea.

Going above and beyond the duty of engineering and booth construction, Engel and his team suggested changing the carpet and material samples to be circular. His keen eye for detail was instrumental in creating a booth that was congruent in both theme and aesthetics.

The result was a perfectly executed exhibit that received glowing responses from potential customers. Kirk adds, “Many people commented directly that they were drawn to the booth from afar and weren’t disappointed with what they found.”

Saint-Gobain’s full line of hazmat suits was visible from every angle of the show floor, taking full advantage of their island-sized booth. Drayage and freight costs were monitored closely, ensuring that the final cost came in under budget.

Outside of their advance work, the Saint-Gobain team was particularly impressed that Engel flew out to Indianapolis to personally oversee the exhibit’s set-up, making sure the “Rogers Method” of high standards was being implemented. “As everyone in the business world knows, tradeshow investments in this recession are more closely monitored and we couldn’t be more pleased with the service Rogers provided and the end product they so successfully engineered,” says Kirk. 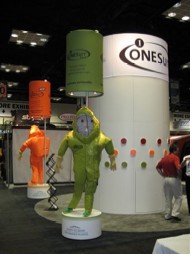